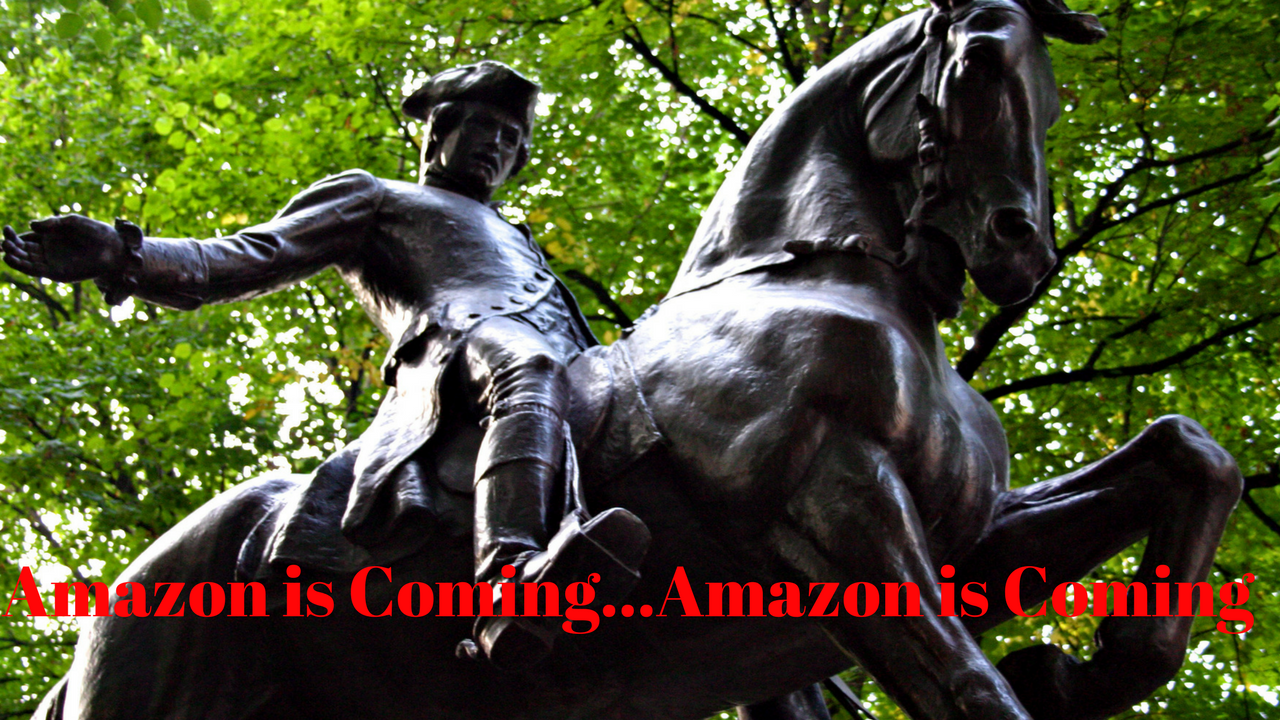 We are in a new economy, and beyond it being a post-recession economy, it’s an amazon dominated economy.

While you were sleeping amazon just might have been plotting to take over your business…so if you want to thrive, I need you to get out of your slumber now!

Back in ‘08 when the market crashed, I witnessed those who chose to stick their head in the sand and do nothing who eventually fell out of the game…many of them new pharmacy entrepreneurs, closed shop, gave up on dreams.

While those who ‘played by the rules” took a hit in profits but are still selling, although are finding things to be an uphill battle right now, when the economy seems to be finding its pace.

Those who stuck their feet in the sand, drew the line, marketed, promoted, thought outside the box and worked on their business are experiencing robust growth and opportunities.

The thing is, amazon is already here…and they can become your biggest competition practically overnight.

Let’s first look at the markets that amazon has disrupted, dominated and then disseminated.

·       Small book stores, mega book stores- remember, amazon started out selling just books, but now you can get virtually anything from the retailer

·       Electronics. Don’t be fooled to think it was Best Buy and Walmart who sent Circuit City packing

As far as online shopping- amazon is goliath.

This basically means they could double their ownership of the online retail world in less than a decade…where they already were the biggest player.

The meat of amazon’s sales comes from:

And you might say, “Pharmacy…no way…. amazon won’t be filling prescriptions anytime soon.”

Don’t fool yourself…for years amazon has been looking at medicine, pharmaceuticals and health and beauty.

Amazon has the ability to create a central fill and delivery system that would dwarf any mail order player, and cost effectively get the patients prescription to their door before your wholesaler gets to your pharmacy.

Look at that 10% of sales, don’t you think Bezo’s is looking at that as an easy area to make a major impact on their 135 billion in sales they made in 2016? Especially when it plays a major piece in the 17.8% of healthcare’s role in the GDP.

Do you remember amazon’s drugstore.com? They ended up selling it to Walgreen’s which then fizzled out…although this shows they are no stranger to the game.

Pharmacy has stayed on amazon’s radar the entire time as over the last few years, they have held at least one annual meeting to discuss the viability.

Clue # 2 Amazon has been actively recruiting people from the healthcare space, hiring a business lead to figure out how the company can break into the pharmacy market.

With the increase in high-deductible plans, and consumers paying more for health care (which is parallel with the success of GoodRx, they seem to be getting more serious.)

Clue #3 Amazon has recently begun selling medical supplies and have developed a program to ensure that the company is meeting all regulatory requirements.

Gradual steps to the pharmacy market…

Clue #4 Just this year, amazon Japan expanding its Prime program to begun selling pharmaceuticals and personal health products, what might prove to be valuable testing ground for amazon USA.

Maybe you realize that 90% of all retail sales are still brick and mortar…and this will keep you safe.

Please don’t rest on those laurels…nor fool yourself to believing your customers won’t abandon ship.

Online trends continue to explode away from the brick and mortar. Where online sales reached $394 billion in 2016, experts forecast US consumers will spend $632 billion in 2020.

But amazon will not get complacent with this number, as one of Jeff Bezo’s secret to success is to “treat every day like its day 1 of your business.”

Clue #5 As far as brick and mortar is concerned, amazon has a plan for that too, and soon they might be coming to a neighborhood near you.

Amazon has been jumping into the brick and mortar setting, albeit it might be only for testing markets at this point, they have opened brick and mortar book stores, convenience stores without cashiers, and campus bookstores which hold no inventory but ship your orders to the store (it would be easy enough to create a depot pick up site while partnering with another retailer.)

If you see amazon testing a concept, and it works, you can surely expect to see it implemented and grow fast.

With market capitalization, an open checkbook, and the ability to act fast, amazon can literally flip a switch and make an immediate impact to any market---so I don’t want you to get caught ill-prepared.

Take for instance the grocery world, Whole Foods is not Amazon…what if a similar scenario was to happen with a Walgreens, CVS, Pharmaca, Diplomat or any impactful chain which stakes heavy weight in their markets.

Amazon could very quickly start mini clinics and expand their reach to patient care providers, put up pharmacies, or even place pharmacies in Whole Foods.

Though it is still only speculation, it seems more and more likely that Amazon will be entering into the pharmacy marketplace in the near future.

Amazon may be in talks with some middle-market pharmacy benefit managers "in an effort to get into various contract arrangements," according to analysts at investment bank Leerink Partners who spoke with pharmacy executives, Axios reported.

Amazon may pursue a mail-order pharmacy, initially targeting uninsured customers or people who have high deductibles and pay cash for most of their prescription drugs, Axios said.

However, Leerink estimates that it will take from 18 to 24 months for Amazon to get pharmacy licenses in all 50 states.

CNBC reported that Goldman Sachs created a 30-page report detailing Amazon’s likelihood of entering the space. They cited recent efforts, such as the secret “1492” team at Amazon, which is dedicated to efforts like tele-medicine and electronic medical records.

Ok…now hopefully I have your attention, and you are deciding NOT TO fall into the comfort that kills,

Let’s take a look at their secret sauce, what makes them thrive, what gives them one of the strongest brand loyalty, and lessons you can take to make your pharmacy much stronger.

Amazon prime is a major reason behind a recent survey where 52% of people polled said they go right to amazon first for their shopping needs.

Prime has boosted convenience, and neutered one of the biggest objections to online shopping, as well as tools which brick and mortar had in their favor- shipping cost.

Basically, if you can wait one to two days…you can get what you desire, easy and hassle free.

Do you have a membership or rewards program in place? If so, how does it compare to the competition? What benefits are your customers really walking away with or even using? Giving stuff a way is great…but its only of value if people value, desire and use.

For most brick and mortar retailers, inventory is a challenge. It’s an often hard to control expenditure that can weigh heavy on the bottom line.

Be a master of your inventory…strong in what sells, sensible in the slower movers…but please, do not inconvenience your customers with a reluctance to hold inventory due to cheapness….oh….and order it asap, don’t wait for a huge order because they will go elsewhere

What if you don’t have something in stock, how quick can you get it? Can you ship it to them?

Amazon prime is offered to students for half price…students in college have constant needs and often, might not have the easy access to shopping, aside from what’s on campus.

Every order from a student, amazon counts on further building a relationship to have a prime customer for life.

Find a way to have customers gain entry into your business at an earlier age…and keep those customers for their life. Then look at other demographics you are not currently serving, and see how you can serve them. This might require offering new products or services.

Do you have a way to collect customer data? If you are marketing to them online there are many ways to do so. And in your marketing material, speak to them based off their wants and needs.

Maybe you have a store rewards card. What kind of data can you collect here? Consider diabetics clubs, craft your presentations around groups of people based on their disease states and wishful health states.

#5 Amazon has the bulk of their clientele in habit mode

This is the heart of highly effective positioning. When the vast majority of amazons customers think about purchasing something…they go to amazon first. This is the essence of proper positioning.

You need to become the instant habit of your customers. The first person they think of when they have to solve a problem. This needs to be ingrained in your marketing and communication, and keep yourself in front of their mind.

Don’t let them forget about you or they will be hijacked by the competition- or amazon.

Expertise! And look towards the future

If you work hard to dial in the other points…check off as many boxes that you can- while becoming the obvious expert for your community- expertise in today’s wants as well as the trends of the future…then you will find yourself resilient to amazons or other’s attacks.

Join our mailing list to receive the latest news and updates from our team.
Don't worry, your information will not be shared.